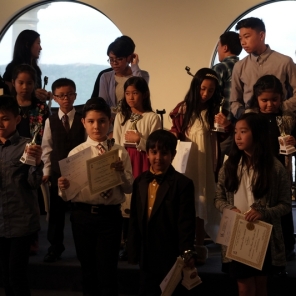 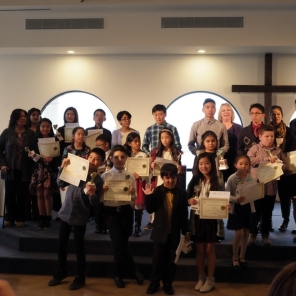 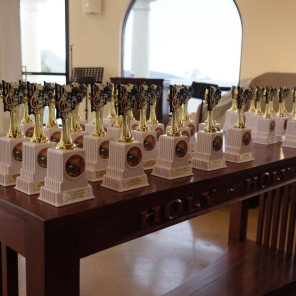 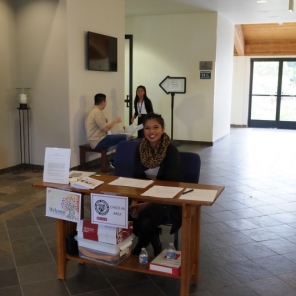 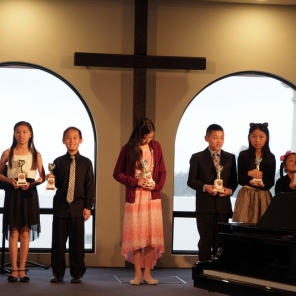 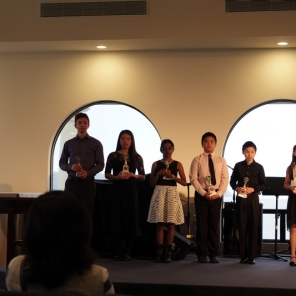 Despite the rains and cold weather, the event did not the dampen the spirits of those who attended and participated in the chapter’s Winter Festival. Student performers, their families and supporters in tow, showed up and played their prepared pieces with gusto. Several instruments were represented: piano, violin, viola, cello and classical guitar. What a remarkable and inspiring way to spend a rainy Saturday! Fourteen students divided into skill levels (elementary, early and late intermediate levels, advanced level) performed in the Competitive Division while twenty-four students performed in the Non-Competitive Division. Mount Soledad Presbyterian Church in La Jolla provided the wonderful venue. Kudos to those who organized the event, especially the 10 participating teachers and studios, event chairs Tim Sumner and Mark Asuncion, event facilitator Sally Sumner, overall program coordinator Rowena Asuncion, Alex Quiman for documentation, and adjudicator Timothy Broadway. Here are  some pictures of the event, along with the list of winners. All winners and adjudicator’s pick will be featured in the June 2017 Honors Recital and Gala. Don’t forget to visit our Facebook page for more pictures and videos of the event.

Established in 2016, SDSC is a professional non-profit music organization affiliated with Music Teachers National Association and California Association of Professional Music Teachers. Activities of SDSC are aimed to promote the art and appreciation of music as well as the advancement of musical education in San Diego and its vicinities. View more posts